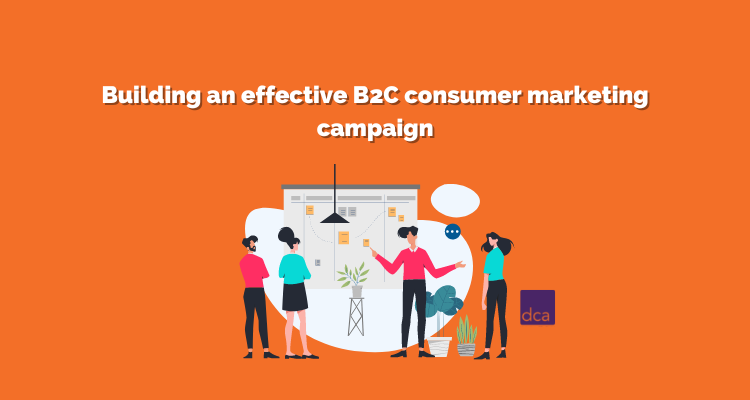 B2C marketing campaigns skip the middle man and see a company or organisation talking direct to the consumer.

Marketing campaigns involving B2C often see marketers examining trends, researching their target customers and, of course, keeping an eye on what the competitors are doing. Most of all—the aim is to bring something fresh and new to the table. A strong marketing strategy engages its audience successfully.

There are plenty of different strategies within B2C marketing campaigns. What works successfully for one company, might not work successfully for another. Above all, they’re vital to executing well if you want to generate awareness of your product or service.

Why are B2C marketing campaigns important?

B2C marketing has been around in some form or another for centuries. However, it did see a huge surge in popularity in the 90s. The internet was relatively new which opened the door for eCommerce. With this new invention at their disposal as well as other media streams, it’s easy to see why the surge happened.

Social media can be a fantastic medium for B2C marketing. The ease and accessibility of being online help businesses communicate a lot more effectively with their customers. It introduces people to your brand and encourages them to interact and buy/opt into your service offering.

Overall, B2C marketing is a powerful marketing tool that your company should be utilising. Everyone can use it—regardless of whether you sell cars or coffee.

– Introduces people to your brand

Bad marketing can have a negative impact on your business. If it was forgettable, it hasn’t done its job. Equally, if it’s memorable but for terrible reasons, your marketing campaign wasn’t effective. It’s always recommended to explore as many channels and strategies as possible.

Spending your marketing money (paid-for advertising) on TV and cinema, radio and in print, as well as billboards and posters (outside advertising) and online is often referred to as ‘above-the-line marketing.’ Another key, and often central, strand of a marketing campaign is the use of successful public relations (PR), otherwise known as ‘below-the-line’ marketing. Below-the-line marketing is specifically targeted towards individual consumers and involves having direct contact with customers. It builds stronger relationships and trust in brands. As well as PR, ‘below-the-line’ marketing can include the use of search engine marketing, SEO, social media, content marketing (e-newsletters for example) and events.

It could be argued that consumers are more likely to trust PR compared to blatant advertising, as they understand that a company has specifically paid to have their advert seen. PR can result in editorial or credible news content and if that is delivered by a reputable and credible source, it can be far more engaging or believable and hold more credibility. Although the credibility of news sources is another discussion entirely!

At DCA PR, we have been delivering B2C marketing campaigns using PR for clients for more than 20 years. In 2009/10, we successfully orchestrated an award-winning campaign during the digital TV switchover in the West, Westcountry and Channel Island regions for Digital UK. This campaign involved breaking down people’s resistance to change from using analogue television, whilst simplifying detailed information relating to transmitters, aerials and recording equipment.

Media activity involved hundreds of different pieces of popular, well-received coverage in local newspapers, on radio and regional television. We promoted over 90 roadshows and dozens of advice points, coordinated regular TV and radio spots for our spokesperson, Q&A sessions, and phone-ins, wrote case studies and conducted trials for journalists and news editors to ‘road-test’ equipment. We also took journalists, photographers, and TV cameras to transmitter sites across the region to see the switchover take place.

DCA teamed up with local and regional tourism bodies to highlight the importance of preparing guest accommodation for the switch. We also worked extensively with local communities, including charitable organisations, community groups and other key stakeholders to execute the campaign successfully at a grass-roots level, especially older or vulnerable people, less likely to be able to access or use technology successfully.

A creative campaign for St Ives BID that reminded tourists not to feed seagulls also saw DCA awarded a Cornwall Business Award for Best Marketing Campaign. An interactive ‘seagull trail’ was devised. It involved local artists, schools, businesses, and community groups. Each was asked to design 12 eye-catching gull models, and these models were then placed in shops around St Ives.

The campaign was a huge success. Media coverage reached an audience of more than half a million people in the initial weeks alone.

Through carefully executed research, we discovered that many children in the region did not or could not identify the source of their food and where it was grown or produced. This led to a successful campaign to educate school children and encourage them to grow their own fruit and vegetables at home and at school.

The marketing strategy was aimed at all primary schools in Devon, Cornwall, Dorset and Somerset. The aim was to help create new vegetable gardens within schools to encourage children to grow their own. The Cornish Pirates and Exeter Chiefs rugby teams even took a day off to help children harvest some of the veg they had grown at school. As a result, more than 50 schools across the region were gifted their own gardens, so the children could plant their own vegetables and learn more about growing their food.

It can take a lot of components to create a successful B2C marketing campaign. Whether you’re selling a product or raising awareness, there’s plenty to consider.

Creativity and high-quality content can communicate a message and tell a story if it’s done in the right way. At DCA, we communicate client messages to the right people across the relevant channels. We ensure all of our campaigns are both engaging and effective and are proud of all of the campaigns we’ve run over the years.

If you would like assistance with your B2C marketing campaigns, then get in touch.